Happy Birthday To My Favourite Ginger

Wish your Favourite Ginger a happy birthday with this quirky fun card.

Our Cards Are All …

As a proud ginger myself, with several ginger children, I felt there was a need for cards for us redheads! We all have a favourite ginger…so wish them a special ginger birthday!

Read some facts about gingers here! Did you know Ireland has the second highest concentration of gingers in the world?

Redheads have thicker hair than anyone else. Each strand of red hair is generally thicker than other shades which compensates for the fact that redheads have less hair. Apparently they have – on average – 90,000 strands while blondes have 110,000, and brunettes have 140,000.

Blue eyes and red hair forms the rarest combo on earth. Most (natural) redheads will have brown eyes, followed by hazel or green shades.

Climate change is threatening the gene. Given that red hair doesn’t adapt to warm climes, the gene could – at some point – become extinct. A scientist told ScotlandNow: “I think the regressive gene is slowly dying out… Climate change could see a decline in the number of people with red hair in Scotland.

On average, people with red hair are 20% more resistant to aesthetic than people without. No one knows why. Maybe it’s because they have super powers.

Gingers are historically thought of as wild and ferocious people. This is more down to their association with the Celtic people in general. The invading Romans (who ended up writing the history we read) had never encountered the colour before, and the native Celts – many of whom were ginger – were understandably resistant to the foreign invaders. Moreover, the Vikings, who also sported the hair, were known as ferocious, warrior-like savages, adding to the image.

What better way to say Happy Birthday to your Favourite Ginger? Check out some of our other birthday cards for your non ginger friends!

There are no reviews yet. 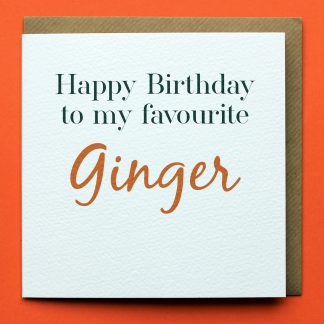