Wishing You All The Luck In The World

Wishing you all the luck in the world.

A good luck card, with an extra special little bit of encouragement 🙂

‘Wishing You All The Luck In The World’ is an ideal card to give to someone starting a brand new adventure! Wish them luck for whatever they’re doing with this thoughtful card! Wishing someone luck is a great way to shoe that you care about someone.

It has often been said that four leafed clovers are native to Ireland, which is where the phrase ‘the luck of the Irish’ comes from.

Do you know why four leafed clovers are considered lucky?

The Celts considered four-leaf clovers to have magical powers of protection, able to ward off evil and bad luck. It was also believed that carrying a clover allowed the bearer to see fairies. Celtic fairies were dangerous little creatures who might play deadly tricks or steal your children, so carrying a clover meant that you could take evasive action if you spotted one!

Children in the Middle Ages believed if they carried a four-leaf clover, they would be able to see fairies, and the first literary reference to suggest their good fortune was made in 1620 by Sir John Melton.

To this day, four leafed clovers are a universal sign of good luck. So if your loved one is stepping out of their comfort zone, and could use a bit of luck, this is the card for them!

Our Cards Are All …

Not the card for you? Head over to our Encouragement section for more. 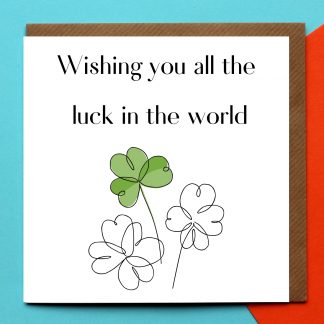 You're viewing: Wishing You All The Luck In The World £2.95
Add to basket