The card reads “Best Valentine In Belfast”. It’s perfect to give to that special someone on Valentine’s Day.

St Valentine’s Day is an annual festival to celebrate romantic love, friendship and admiration. Every year on 14 February people celebrate this day by sending messages of love and affection to partners, family and friends.

Valentine’s Day is named after Saint Valentine, a Catholic priest who lived in Rome in the 3rd Century. There are many stories about St Valentine and over time these stories grew into the legend we know today.

At the time of Valentine’s life, many Romans were converting to Christianity, but the Emperor Claudius II was a pagan and created strict laws about what Christians were allowed to do. Claudius believed that Roman soldiers should be completely devoted to Rome and therefore passed a law preventing them from marrying. St Valentine began to marry these soldiers in secret Christian ceremonies and this was the beginning of his reputation for believing in the importance of love.

Eventually, Valentine was found out and jailed for his crimes against Claudius. While imprisoned, Valentine cared for his fellow prisoners and also his jailor’s blind daughter. Legend has it that Valentine cured the girl’s blindness and that his final act before being executed was to write her a love message signed ‘from your Valentine’. Valentine was executed on 14 February in the year 270.

Today, it is a day for celebrating our love for each other. Why not show your special someone how much you care by sending them this funny, quirky card? 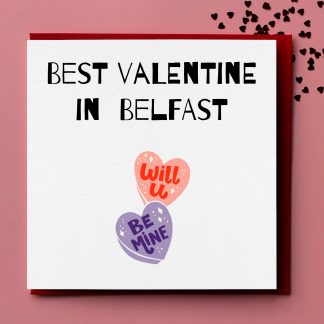 You're viewing: Best Valentine In Belfast £2.95
Add to basket